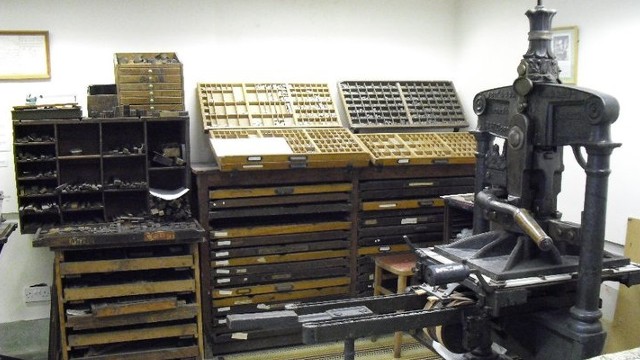 1. What’s the greatest work of art in history? In the 1980s, I’d have been very happy with the idea that it was the 7” of “Ever Fallen In Love (With Someone You Shouldn’t’ve)” by Buzzcocks. I might even have said so, had I been smart enough. These days I’d dispute the terms of the question.

2. I spend most of my working life creating electronic documents, typing words so they show up on a screen. A success is creating a file worth loading onto something called SharePoint, a great success might get sent to a laser printer, or ten laser printers. In my spare time, amongst other things, I am a letterpress printer: I arrange type or printing blocks to form a raised surface which, when inked and pressed on paper, makes indelible marks on a tangible object.

3. William Morris’s socialism was based on making: he knew the workers would be well-served by owning the means of production but he took that further and more literally than most: he believed that human happiness would be achieved when all of us were engaged in crafting the things we needed as a society. He hated the quality of mass-produced goods, but he also hated the effect mass-production had on people, believed it alienated people from the satisfaction of craft.

4. The press I mostly use at home is called an “Adana Eight-Five”. It sits comfortably on a table-top. Talk to a proper printer and they are likely to be a bit sniffy about a press like mine. “Hobby kit”, they are likely to say. Some younger professional printers seem bemused and delighted that anyone would bother typesetting and printing by hand, given how inefficient it is.

5. William Morris designed, wrote, drew, wove, translated, carved and also printed. He used his press to make some of the most breathtaking printed materials - have a look at The Kelmscott Chaucer sometime - as well as political pamphlets. The Albion Press he used is still there in Kelmscott House in Hammersmith. You can go and have a look at it; it’s beautiful and looks robust enough to last forever.

6. Fine printing - high-value, high-skill, beautiful letterpress work, has been around since it became possible to use printing as an efficient alternative to monks and scribes. There was another sort of letterpress, though, a more everyday kind of work. Business cards, dance cards, handbills, lots of stuff. It was rendered irrelevant by technological advance, of course: various kinds of lithography, photocopying eventually. Electronic communication, of course. It’s almost gone now, though there remains a smallish “craft letterpress” world, mostly amateur. Some people even make their living by craft letterpress - wedding stuff is the big moneyspinner, apparently.

7.  This record cover is made of 280gsm paper (“Context Cream”), supplied by Paperback Paper in Beckton.  The design and layout was by John Jervis. This section, inside the sleeve, was laser printed by Footprint Workers Co-operative in Leeds. The flower images, after Morris’s designs, were made into polymer printing blocks by PeacockBlockmaking of Berkhamsted; the text on the outside of the sleeve is hand-set using 32 point Centaur italic type from the Kelmscott House collection. It was hand-inked using “warm red” Van Son rubber-based ink and printed by hand on the Kelmscott Press.

8. William Morris was troubled by the fact that only the rich could afford to buy the amazing things produced by properly-paid artisans in his workshops. Later followers worked out how to make his style, or something like it, much more widely available: by using the mass production techniques Morris hated. The stuff which ordinary people could afford was better; the problem of alienation perhaps less so.

9. Walter Benjamin famously worried about what happens to art when it’s mass-reproduced: he reckoned that an original work of art had an aura, derived from being in a time and place, which a mechanical reproduction could never have. He was talking about visual art rather than music. But I understand  very well that it’s the 7” of “Ever Fallen In Love” which is the perfect piece, and I don’t care how it was made, or that there’s no chance that any Buzzcock even clapped eyes on my copy.

10. Vinyl records are made by making an impression with a “stamper” into softened plastic. As a process, it’s not so different to letterpress. Both, too, are tiny niches left over from past mass markets. They are both more or less obsolete technology, but loved and valued as such. The package in your hand is mechanically mass-produced but also hand-made, or at least hand-finished. It really cannot decide whether it’s artisanal or mass-market, professional or amateur. I can’t work out whether that matters.
Posted by wiaiwya at 00:30